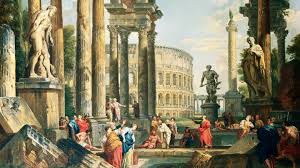 1 Paul, a servant of Christ Jesus, called to be an apostle and set apart for the gospel of God— 2 the gospel he promised beforehand through his prophets in the Holy Scriptures 3 regarding his Son, who as to his earthly life was a descendant of David, 4 and who through the Spirit of holiness was appointed the Son of God in power by his resurrection from the dead: Jesus Christ our Lord. 5 Through him we received grace and apostleship to call all the Gentiles to the obedience that comes from faith for his name’s sake. 6 And you also are among those Gentiles who are called to belong to Jesus Christ.

7 To all in Rome who are loved by God and called to be his holy people:

Grace and peace to you from God our Father and from the Lord Jesus Christ.

8 First, I thank my God through Jesus Christ for all of you, because your faith is being reported all over the world. 9 God, whom I serve in my spirit in preaching the gospel of his Son, is my witness how constantly I remember you 10 in my prayers at all times; and I pray that now at last by God’s will the way may be opened for me to come to you.

11 I long to see you so that I may impart to you some spiritual gift to make you strong— 12 that is, that you and I may be mutually encouraged by each other’s faith. 13 I do not want you to be unaware, brothers and sisters, that I planned many times to come to you (but have been prevented from doing so until now) in order that I might have a harvest among you, just as I have had among the other Gentiles.

14 I am obligated both to Greeks and non-Greeks, both to the wise and the foolish. 15 That is why I am so eager to preach the gospel also to you who are in Rome.

16 For I am not ashamed of the gospel, because it is the power of God that brings salvation to everyone who believes: first to the Jew, then to the Gentile. 17 For in the gospel the righteousness of God is revealed—a righteousness that is by faith from first to last, just as it is written: “The righteous will live by faith.”

18 The wrath of God is being revealed from heaven against all the godlessness and wickedness of people, who suppress the truth by their wickedness, 19 since what may be known about God is plain to them, because God has made it plain to them. 20 For since the creation of the world God’s invisible qualities—his eternal power and divine nature—have been clearly seen, being understood from what has been made, so that people are without excuse.

21 For although they knew God, they neither glorified him as God nor gave thanks to him, but their thinking became futile and their foolish hearts were darkened. 22 Although they claimed to be wise, they became fools 23 and exchanged the glory of the immortal God for images made to look like a mortal human being and birds and animals and reptiles.

24 Therefore God gave them over in the sinful desires of their hearts to sexual impurity for the degrading of their bodies with one another. 25 They exchanged the truth about God for a lie, and worshiped and served created things rather than the Creator—who is forever praised. Amen.

26 Because of this, God gave them over to shameful lusts. Even their women exchanged natural sexual relations for unnatural ones. 27 In the same way the men also abandoned natural relations with women and were inflamed with lust for one another. Men committed shameful acts with other men, and received in themselves the due penalty for their error.

28 Furthermore, just as they did not think it worthwhile to retain the knowledge of God, so God gave them over to a depraved mind, so that they do what ought not to be done. 29 They have become filled with every kind of wickedness, evil, greed and depravity. They are full of envy, murder, strife, deceit and malice. They are gossips, 30 slanderers, God-haters, insolent, arrogant and boastful; they invent ways of doing evil; they disobey their parents; 31 they have no understanding, no fidelity, no love, no mercy. 32 Although they know God’s righteous decree that those who do such things deserve death, they not only continue to do these very things but also approve of those who practice them.

Paul gave a very clear picture of his heart and why he desired to visit the people of Rome. Clearly, the gospel was being spread throughout Rome, probably by many different means. What the Romans experienced when Christ was crucified probably had a lasting impact on many of them. The work of the other apostles surely began to reach the ears of the Romans, along with the many encounters various Roman soldiers had with Jesus or his disciples. And of course, Paul was traveling everywhere, so word of what he was doing and preaching was being relayed far and wide.

Paul then turns his attention to business and immediately starts addressing the issue of sin, first by saying that God’s power and nature is all around us in creation; we are without excuse to not recognize that.

Rome, when it comes to sin, was especially famous for two things. 1.- they worshipped many, many different gods. Rome was full of gods, gods of the sun, the moon, the stars, gods of war, of love, of beauty, of prosperity and so on. But Paul points to God by saying men have sinned and became fools because they created images of created things to worship, rather than worshipping the Creator. That had to have gotten their attention, and created quite a culture shock.

2.- Sexual sin was as commonplace and accepted as eating breakfast. Orgies, sexual slavery, and sexual immorality was well known in the Roman world. Paul once again points out their impurity, and specifically mentions homosexuality between both men and women. And he goes on to compare that to what the Romans may have considered wrong behavior like gossip and greed, murder and malice. Paul was saying that false idols and sexual sin fall into the same catagory as all these other things. Again, Paul is speaking very counter-cultural. And he ends of by essentially saying; you know better but you continue to do it and encourage others to do the same. Shape up!

There is a lot to chew on in this chapter, but the verse that caught my attention, for whatever reason, was verse 20.  God is all around us in everything, and we are without excuse to not see Him. This verse always gets me thinking. Do I see God all around me? Do I really take the time to marvel at His power and creation? Do i take the world around me for granted? I think I do sometimes, maybe too often. Let’s take time to really see what’s right in front of us.

And of course, let’s be careful what we worship. What created idol do we worship rather than God. Let’s reflect on one question today in this time of world fear; do I keep my eyes focused on God or do I keep them focused on the media?

Lord, we are so grateful you included us gentiles in your plan of grace. Help us to see you in everything around us. Help us to be wise and not worship created images, but You, the Creator. Help us to avoid sin and resist temptation, let us not give in to our worldly and fleshly desires. We love you Jesus, in your name, amen.

We’ll see you next week. Have a great Good Friday and Easter Weekend!